Two weeks ago, I had the incredible experience of serving as a part of a team of Americans, Czechs, and Slovakians to lead a Business English Camp in the Czech Republic (I mentioned the need for prayer for this camp in my last adventure update post – if you prayed, thank you!!). God definitely worked in really cool ways through the week, and it was a significant blessing and encouragement to be a part of it!

Since returning from the Czech Republic, I have been trying to process a myriad of thoughts and feelings – as well as the specific lessons I learned from the week. In many ways, I’m still processing, and I’m sure God will continue to teach me new lessons – but, still, I’m going to share some of what I learned here.

God Worked Through My Weaknesses

This was a theme for me all throughout the week. I made mistakes, but God redeemed them. I often felt too exhausted to teach, but God taught through me. I often didn’t know how to have hard conversations, but God revealed the answers. This all increased my recognition of my need for Him. It was both humbling and so beautiful.

Acknowledging my weaknesses throughout the week moved me consistently towards prayer. I found myself using as many spare moments as I had (though there weren’t many some days!) to find time to walk outside in the mountains, just me and God. During one

particularly memorable prayer session, I just spent about an hour with my eyes closed on a swing at the side of the campground, listening to music and praying. I thanked God for the camp, the students, and the team, while also acknowledging our need for Him to be present in every part of the week.  This refocusing, this intentional step of giving myself and my weaknesses to Him, completely changed everything about the week for me. I found myself engaging in hard conversations that I normally would have avoided. I found my energy renewing every morning in time for teaching, despite a very limited sleep schedule. I found that God led me each day and each hour, so that I always knew where to go and where He wanted me to be.

These are, of course, lessons I want to take with me – lessons that are applicable for my entire life, and for everyone’s. God desires to work wonders through our weaknesses. Though we are limited, His love is boundless, His mercies are endless, and His strength is neverfailing.

The Importance of Honesty and Humility

I often struggle with opening up about my own struggles, doubts, and failures.

I would rather keep those things between me and God than be seen as a downer, or maybe as a failure. But, throughout the week, the best and deepest conversations I was able to have occurred after moments of openness, honesty, and humility.

It was amazing what happened when I was willing to be vulnerable, willing to learn, and willing to admit mistakes. In every case where this occurred, it led to others also opening up, admitting mistakes, and being open to learn. As Christians, I believe it is vital that we admit the mistakes we have made (personally, and collectively). And, I believe it is essential that we have the humility to admit that we might be wrong about aspects of our beliefs and opinions – and thus, be willing to listen to other perspectives, learn, and grow. This is, really, yet another way God works through our weaknesses; but, it’s also important that we admit to those weaknesses. 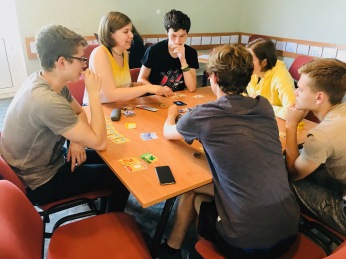 During the week, I had to learn to listen to God’s voice in the midst of many other conflicting voices. This can be difficult – especially when so much is going on around you. But, I’ve learned that it is just as important, or perhaps even more important, to intentionally listen for God’s voice during these times of craziness.

So, each time I had a choice of how to spend my time, I tried to go wherever He led. Sometimes, this meant staying up late praying instead of sleeping; sometimes, this meant engaging in a deep conversation with a student instead of spending time with other friends and family. Sometimes, this meant taking time to rest, or to be alone with God, or to prepare my lessons for the next day. At any given moment of free time, there was an almost infinite number of possible ways for me to spend my time – thus, the only way to know I was spending that time as best as I could was to go where God called me to be.

This is something I’ve been learning all throughout the last year. But, I experienced it in a new way during this camp week. Many times, I felt that God was giving me a choice of how to spend my time. Multiple great opportunities came up, and I felt Him saying: “These are both good – which one will you choose?” While God did give me some direction, He also often left the final choice up to me. I believe this is significant – not only did I have to listen to Him for direction, but I also had to take ownership for my ultimate decision. Thinking back on the week, I wish I would have spent more time with certain people, or attended certain activities that I chose to skip. But I also would not choose to erase any of the conversations I was able to have, the times I spent alone with God, or the activities I did participate in. Thus, I am able to have peace about how things went, even though I tend to worry that I could have done more or spent my time in better ways. God gave me choices, He let me make them, and then He worked through them.

The Challenge of Letting Go

While the week I had at camp was wonderful, it was quite challenging for me to say goodbye to all of the amazing new friends I had made by the end. I wished I could continue those new relationships, instead of having to leave so soon after they had just begun. I also started thinking about all of the aspects of my teaching that could have been improved, what more I could have said, and what more I could have done. Yet, I know that I have to let all of this go, and trust God with the outcome. I know that He worked through that week, and that He worked through our team – and thus, I know that He will continue working in the lives of each and every person who was at the camp.

Since returning to Kansas, I’ve experienced a wide range of conflicting emotions. My initial response upon arriving home was a mixture of loss (missing the people, country, and experience of camp) and inspiration. Through my time in the Czech Republic, God gave me a heart for the team, kids, and country – and, it was very difficult to leave, knowing that it will be quite some time before I return. But, at the same time, I felt a sense of inspiration  to return to my specific callings and communities in Kansas, and to continue to grow as a teacher. In this way, I was renewed through this camp in two ways – both through an opening of my heart towards others, and through a conviction of what I am called to do. The sense of loss, I believe, is equally important to the sense of inspiration. I believe God wanted me to experience both.

In a similar way, I have experienced a mixture of encouragement as a teacher and anxiety that I could have taught better. Throughout the week, I experienced some of the strongest positive emotions I have ever felt while teaching. I connected with the students, and I loved working with them. I also received some incredibly encouraging notes about my teaching in my “mailbox” at the end of the week from students. However, at the same time, I recognize many things that I could have done better. When I was preparing my lessons to teach (months in advance), I did not expect the high level of English proficiency and academic excellency that the students displayed – thus, I wish I would have intensified the content, instead of spending some time focusing on elementary business skills. Each of these feelings – both the highs and lows – I also believe are a part of what God wanted me to learn through the camp. He affirmed my call to teaching (through both the joy I found in it, and through the feedback students gave) – but he also affirmed my need to rework the curriculum and improve, so that I have more to give next time.

Thus, through all of this – my feelings of loss, my feelings of inspiration, my renewed call to teaching, and my need to improve – I am being called to move further up and further into His purpose. He teaches us through both joy and sadness, through both inspiration and discouragement. I am thankful for all of it. And thus, now, I must let go of all my anxieties, recognizing that He is using everything that happened at that camp – both the good things and the bad things – towards His purpose.

“And we know that for those who love God, all things work together for good, for those who are called according to his purpose.” ~ Romans 8:28, ESV

One thought on “Lessons from Business English Camp CZ”

What The Bird Said Early in the Year – by C. S. Lewis

“I heard in Addison’s Walk a bird sing clear: This year the summer will come true. This year. This year.

Winds will not strip the blossom from the apple trees, this year, nor want of rain destroy the peas.

This year time’s nature will no more defeat you, nor all the promised moments in their passing cheat you.

This time they will not lead you round and back to Autumn, one year older, by the well-worn track.

This year, this year, as all these flowers foretell, we shall escape the circle and undo the spell.